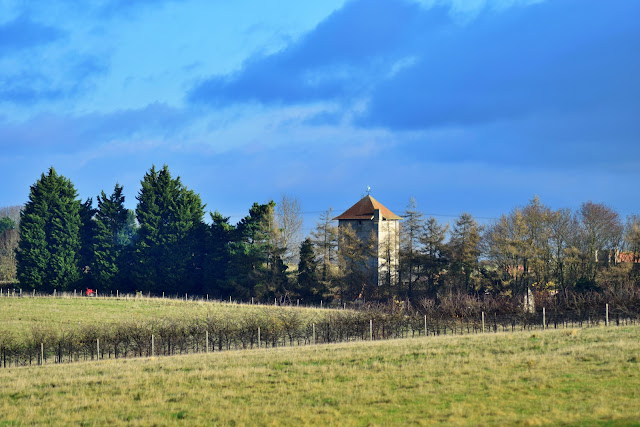 The preceptory of Templum de la Bruere, or Temple on the Heath, otherwise known as Temple Bruer was founded in the 12th Century by Lady Elizabeth de Calz on land donated by William of Ashby. William was soon afterward admitted into the fraternity of the house, he later increased the original endowment. Among the other benefactors are John d'Eyncourt, Robert of Everingham, William de Vescy and Gilbert of Ghent.. The house appears to have been of considerable size and importance.


In 1306 permission was granted to crenelate the great gate. By 1308 it was the second richest Templar house in England. 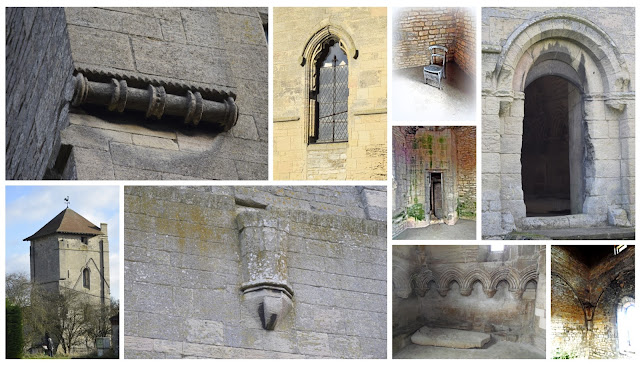 The End of the Templars
The story of the suppression of the Templars is well-known, a plot devised by King Philip IV of France with the help of Pope Clement V.

The suppression of the Temple Bruer preceptory was carried out on 10th January 1308 by the Sheriff of Lincolnshire, John de Cormel, following orders from Edward II.  William de la More - the last Preceptor of Temple Bruer, and Grand Prior of all England together with his knights were imprisoned, together with those of other Preceptories in the district, in Claxlede Gate and other places in Lincoln. The Templars were held until their trial began on 25th November 1309, the Knights were arraigned in the Chapter House of the Cathedral and tried on the following charges :

To all these they pleaded not guilty, and said that “if their brethren in France had confessed such things they lied, to screen themselves from the torture of the rack.”

Most of the charges were without any foundation, it was their immense wealth that the king wanted.

William de la More would not provide any incriminating evidence to his inquisitors and spent the rest of his life in the Tower of London.

Fuller, a historian, wrote, “their wealth was the principal cause of their overthrow. We may believe that King Philip would never have took away their lives, if he might have took their lands without putting them to death; but the mischief was, he could not get the honey, unless he burnt the bees.”

The remaining Templar knights allied with the Hospitallers.

Preceptors of Temple Bruer The Knights' Hospitallers
Following the suppression of the Templars, the Knights Hospitallers took over the Preceptory and in 1338 a commandery of the hHspitallers Order under the same preceptor who commanded the house at Eagle.

In 1338 the revenue of the house was £177 7s. 7d., including the churches of Ashby and Rowston, the free chapel of Bruere, with lands at Bruere, Rowston, Wellingore, Ashby, Brauncewell, and North Kirkby; the expenses were £84 0s. 2d. The clear value of the house at the dissolution was £16 19s. 10¾d., including the bailiwick of South Witham and the farm of half the rectory and the grange of Holme in Heckington, with perquisites of a court

During the 15th century the de Launde family, descendants of William of Ashby, made several attempts to recover the church of Ashby from the Hospitallers, the situation was still unresolved in 1531.

In 1539 Sir Giles Russell was made commander of Temple Bruer, but finding that the house was in a ruinous condition he did not live there and made some effort to get it repaired and put in a better condition. In 1539 he was in Malta, he probably saw little of his commandery before its dissolution in 1541.

The fifteenth-century seal of the preceptor of Temple Bruer is a pointed oval representing a castle elaborately designed, with an outer wall of masonry embattled, circular keep embattled, and on it an Agnus Dei.

The Visit of Henry VIII

Henry VIII with his queen, Catherine Howard, commenced a grand tour of England in 1541, to hold a conference with his nephew, the King of Scotland and secondly to visit Lincolnshire and Yorkshire to observe that the counties were at peace after the disruptions caused by the "Pilgrimage of Grace". The king had a meeting and Sleaford on the 9th August and dined the same day at Temple Bruer on his way to Lincoln.


Archaelogical Surveys
There have been three surveys of the site, the first was in 1832/3. Henry Chaplin of Blankney owned the property and asked amateur archaeologist and vicar of Scopwick, George Oliver, to examine the site. It seems Rev. Oliver got into the spirit of the allegations made against the Templars and found tunnels and dungeons:
"Some of these vaults were appropriated to purposes that it is revolting to allude to. In one of them a niche or cell was discovered which had been carefully walled up; and within it, the skeleton of a man, who appears to have died in a sitting posture, for his head and arms were found hanging between the legs, and the back bowed forward. (See Plan a.) Immuring was not an uncommon punishment in these places; and an instance of it was discovered a century ago, in one of the walls of Thornton Abbey, in this county. Another skeleton of an aged man was found in these dungeons, with only one tooth in his head. His body seems to have been thrown down, as if from a trap door; for he lay doubled up; and in the fore part of his skull were two holes which had evidently been produced by violence. Underneath the cloisters, between the Church and the Tower, (see Plan 6.,) many human bones were discovered which appear to have been thrown together in the utmost confusion, and lying at different depths; some being very near the surface. Amongst these were the skeleton of a very young child; and the skull of an adult, with a round hole in the upper part, into which the end of the little ﬁnger might be inserted, and which was probably the cause of death. Several large square stones were taken up with iron rings attached; and altogether, the ruins exhibited symptoms of violence. We can scarcely forbear entertaining the opinion that these are the remains of unhappy persons who had been conﬁned in the dungeons of the Preceptory, for the Templars and their successors were always in feud with their neighbours; and, as they possessed the power of executing criminals within their own liberties, they would not be very likely to remit, what they might conceive to be the merited punishment of delinquency.

"The circular Church (see Plan) was ﬁfty-two feet in diameter within; and was supported on a peristyle of eight cylindrical columns, with massive bases and capitals, and a series of circular arches profusely ornamented with zig-zags and other Norman enrichments, forming a circular area which occupied exactly one-half of the diameter. And the aisle or space betwixt this colonnade and the exterior walls occupied the other half. The aisle, it appears, had a groined roof ; and a portion of it on the north side contained the tomb of the Founder. On the west was the principal door of entrance, with an ascent of stone steps, and a magniﬁcent porch, the foundations of which remain perfect. In the ﬂoor are two cofﬁn-shaped stones, one plain, the other charged with a cross botony in relief." 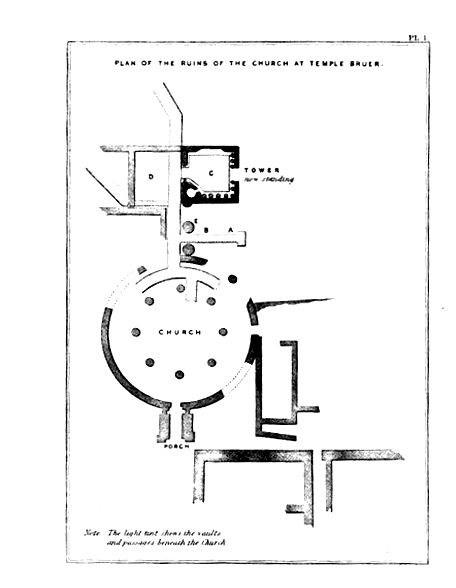 The light tint shows the vaults and passages beneath the church

The next archaeological excavation was in 1907, under the supervision of Sir William Henry St John Hope. Hope found two sets of stairs leading to the crypt, but he didn't find the cellars or passages referred by Oliver, but there is a suspicion that the purpose of the excavation was to disprove Olivers' findings. Hope did plot more of the site, enabling more accurate artists impressions of the site.

The latest archaeological evaluation was in 2005. Pottery was found dating to the 9th-10th century, and flooring of the time period of the preceptory.