The Castle, the King of France and the Dolphins


Antony Bek, Bishop of Durham, inherited Somerton from his mother, Eva de Grey, in the mid 13th century, at the time there was a grange on the site. Bek obtained a licence to crenellate at Somerton in 1281. It was built in the style of Welsh castles of the time, quadrangular with circular towers at the angles and linking curtain walls. It was not built as a defensive structure but rather as a demonstration of power and wealth, and an administrative centre for the surrounding country.

Bek died in 1311 and Edward I took possession of the castle, granting it to William de Beaumont.

The King of France
On the 20th September 1356, during the 100 Years War, Edward, the Black Prince, against massive odds beat and captured King John II, John the Good, at the Battle of Poitiers.

John was brought to England in May 1357, the party landed at Sandwich and travelled onto Canterbury where, after making offerings at the shrine of St Thomas Becket, they rested for the night. Following two more overnight stops, the party arrived in London on 24th May. John, on his white charger, rode through London to the palace of the Savoy. Late in the summer John and Prince Philip visited Windsor Castle where they enjoyed the sport of hunting.

Towards the end of 1358, a series of restrictions were placed on the captives. On 12th December 1358, Roger de Beauchamp was ordered to watch the captives with 69 men-at-arms and moved them to Somerton Castle, 10 miles south of Lincoln. Four large casks of wine were transported there and a ship carried his goods to Lincolnshire by sea. John only remained there for four months and was transferred to Hertford Castle on 4th April 1359.

King Edward III decided to move his important captives back to Somerton; and appointed William, Baron D'Eyncourt, custodian of the Royal prisoners. Two Baronets Sir John de Kirketon, and Sir John D'Eyncourt, and two knights Sir William Colevill and Sir Saier de Rochford, agreed to the safe conduct of the king of France from Hertford Castle to Somerton. It was agreed that Lord D'Eyncourt and his associates should supply, as a guard during the journey, 22 men-at-arms, 20 archers, and 2 gaytes, all of whom were to dine at the Lord D'Eyncourt's table, at the cost of the king, and were to receive daily the following wages: each of the baronets 4s., each of the knights 2s., each of the esquires 12d., each of the horse archers 6d., each of the foot archers 3d., and each of the gaytes 6d., amounting to 39s. per day; whilst, to make up the sum to 40s. the Lord D'Eyncourt was to have an additional 1s. per day. In accordance with this order, D'Eyncourt commenced the removal of the royal captives from Hertford to Somerton on Monday, the 29th of July, 1359, dining at Puckeridge, and sleeping at Royston. On Tuesday, the travellers dined at Croxton, and slept at Huntingdon, remaining there until the following day. On Thursday they dined at " Gerston" (Glatton?) and slept at Stamford, where they remained over the Friday. On Saturday they dined at Easton, slept at Grantham, and stayed there until after dinner on Saturday, August 4th. After leaving Grantham, and following the straight course of the Roman Ermine Street in the evening they arrived at Somerton. Most of the journey would have followed Ermine Street.

In February 1360 there were concerns about a possible French invasion to attempt to release the captives, Edward III ordered that they should be imprisoned in the Tower of London.

Following an agreement about payment of a ransom, King John and Prince Philip were released on the 30th June 1360. The King agreed to send hostages to guarantee the payment of the ransom.

The King and his entourage arrived at Dover on 5th July, where he was entertained by the Black Prince. He sailed from Dover in July arriving in Calais where he was held for three months while he obtained the first instalment of the ransom.

Louis, the Duke of Anjou and son of King John, the most important of the hostages, escaped from his captivity and returned to France with other hostages. King John was mortified when he learned of the escape, returned to England and offered himself as a hostage. The palace of Savoy was again his residence, sadly he did not long survive his generous act. Following a short illness in the spring of 1364, John passed away in April 1364, after having made a will, at the age of 44.

Somerton Castle remained in royal ownership until it was sold by Charles I in 1628.

Today the south-east tower is complete, the house attached to it is said to be Elizabethan (but I suspect it was built in the 19th century). The northeast tower is vaulted, and supported by a single pillar, from which to the sides spring twelve arches forming as many niches in the walls. The lower part of the south-west tower is still visible. The north-west tower and curtain walling no longer exist, probably removed for the development of the farm buildings in the 19th century.

There are remains of moats around the castle with a double moat and earth banks to the south. 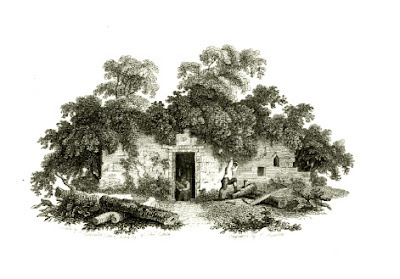 The remains of the Northeast tower in 1801

The Dolphins was an Inn northeast of Lincoln Cathedral.  The attached notice was displayed in the inn for many years. There are a few inaccuracies in the notice; the Dauphin wasn't held with the King, it was Prince Philip and Saier de Rochford was not the owner of the castle.

Was the name a misspelling or an insult to the French?

A modern copy of the notice
in the Dolphins

Recent images of the Castle and Earthworks 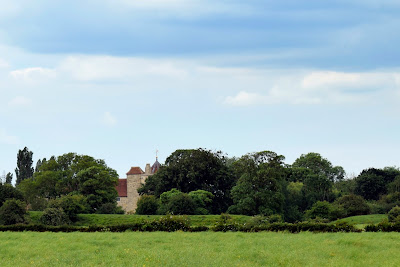 Somerton Castle was bought a few years ago by a local businessman and is now being restored.