West Rasen and the Packhorse Bridge

Packhorses were the main form of transport for carrying goods in the middle ages.  Most roads were little more than tracks, even the Roman roads were in poor condition, so carts were unsuitable during winter and wet weather. Packhorse bridges were built wide enough to carry horses in single file, the parapets are low so as not to interfere with the panniers carried by the horses

The Packhorse bridge at West Rasen dates from 1310 and was built by Bishop John Dalderby, he held lands at Bishop Norton to the north of West Rasen.  The bridge has three elliptical double-chamfered ribbed arches.  Wool was an important source of income for the church, therefore they needed a way of moving it to market quickly and easily.

On early 20th century OS maps there is evidence of a track running across the fields to the bridge and continuing north-west to join with another track from Middle Rasen.

West Rasen is a "blink and you've missed it" village, progress along the A631 is slowed by a 90-degree bend and a roundabout.  Despite this West Rasen has a charm and is worth stopping at to view the things it has to offer.
A small village, without the church, it would be a hamlet, but it has a high proportion of Grade I, II* and II Listed structures, seven in number. 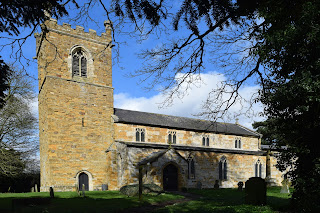 All Saints Church stands on raised ground north-east of the village, and is believe to date from the 11th century with extensive re-modelling over the centuries.  Built of coursed ironstone rubble with ashlar dressings.  It was partly rebuilt in 1829 under the supervision of E J Willson, architect, of Lincoln. Evidence of a north chancel can be seen in the blocked arches of the north wall.