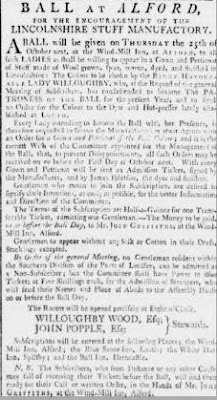 Lincolnshire Longwool was once one of the most important breeds of sheep in this country. These sheep made the fortunes of many families in Lincolnshire: the wool from the sheep was exported to Europe and the sheep were walked to London and killed for their mutton and lanolin.

By the late 18th century sales of Lincolnshire wool had been in decline for many years. The Revd Gideon Bouyer was Rector of Theddlethorpe St Helen and of Willoughby from 1771 to 1810, noticing the poverty and lack of work available in the area, founded a village school, set children spinning and started the Stuff Ball.

The first Stuff Ball was held at the Windmill Inn, Alford in 1785. Lincolnshire Stuff was the wool from the Lincolnshire Longwool, in the early days ladies would be given free admittance to the ball if they were wearing a dress made of Lincolnshire Stuff and the same for men if they were not wearing silk or linen; a different colour for the Stuff was chosen for each year to ensure the ladies always wore new dresses, the colour for the first ball was orange. 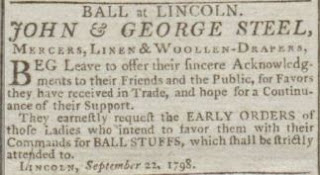 Woollen dresses can be very warm during dancing and in 1803 the rule for free admittance was changed: the ladies were admitted free if they took six yards of the better stuff or 10 yards of the plainer material.

The Stuff Ball continued until 1929 but was revived in 1938, finally ending in 1947 when the Patroness, Lady Worsley, chose mauve and silver as the stuff colours.

The Lincoln Stuff factory was on the corner of the High Street and what is now Robey Street, becoming a boarding house after the Stuff trade declined and then subdivided in private houses.