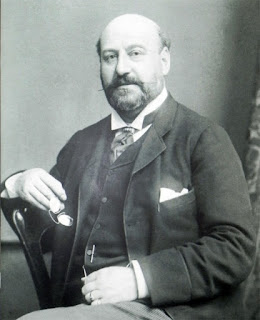 In 1889 Ruston, Proctor & Co accountants certified that over the previous 7 years the company had made an average profit of £50,000 per year.  The same year Joseph Ruston converted Ruston, Proctor & Company into a public company, for this he received £465,000 and he rewarded his most senior employees with shares to the value of £10,000.
The following year demand was made by his workers for a pay rise, he refused the request with the reply:
“I hope you’ll let me get bread and cheese out of my business!”  After this Joseph Ruston was nicknamed ‘Mr Bread and Cheese'.
In the same year, he paid for a new Drill Hall for the First Lincoln Volunteer Company to be built at Broadgate, on the site of Newsum's fire-damaged woodyard. Inevitably the new building became known as ‘Bread and Cheese Hall’.  He could afford the cost as in 1890 the business made a profit of £96,000!

The Drill Hall was opened by Edward Stanhope, Secretary of State for War on 24th May 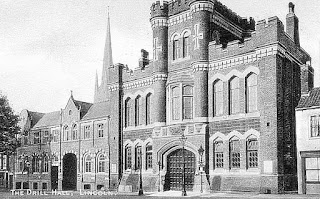 1890.  The building was designed by Major F H Goddard of Goddard and Son, Lincoln.  Built by H S & W Close of Lincoln of brick and Ancaster stone, with embattlements and watchtower, it provided a military aspect to its 55 ft frontage.
The gateway is 10 ft wide with the Royal Arms carved out of stone above.  On the right was the officers’ room with an apartment 24 ft by 18 ft, to the left was the Adjutant’s apartment of the same dimensions with an office for the Sergeant Major.  The hall beyond was 140 ft long by 50 ft wide.  The floor of the hall was specially constructed to deaden the noise of drilling men, made of blocks 10in by 2.5 in by 1.5 in, laid in pitch on a solid concrete foundation.
There was also a soup kitchen with coppers and appliances of every type for use at times of need, no doubt it came in useful for the typhoid epidemic of 1904/5.
Above the hall was a balcony for 150 people and a recreation room.
There was an armoury of sufficient size to store the arms of the whole battalion.  On the north side of the hall was a 50 ft by 50 ft gymnasium.
It had been suggested that Ruston knew that to give his employees an increase in wages to his employees would probably put other local engineering companies out of business!   But is that too kind to an entrepreneur who was well known for his hard business head and tough negotiating style?
at 21.12.19