The legend of Bayard's Leap is locally well-known and is timeless, over the years many versions of the story have been retold; the difference is the hero of the tales, he is a knight, a soldier or a shepherd.  The story I have reproduced below the hero is a shepherd:

"On the old Roman road, called ' Ermine Street,' or ' The High Dyke,' . . . —and at a distance of some three miles from Ancaster, a Roman station . . . —and in the angle formed by the Sleaford and Newark road, which there crosses the Roman road — stands a solitary farm-house; its solitude only relieved by two cottages distant about one hundred yards, on the same side of the great highway, and, more recently erected, a small school building on its opposite side.

"Solitary in its position, its civil status also was formerly isolated, since it belongs to what was an extra-parochial farm, at the north-west corner of Rauceby, sometimes returned with the parish of Cranwell, sometimes with that of Leadenham ; but latterly (under the Act, 20 Victoria, cap. 16) constituted a separate parish in its own right.

"Close by the entrance gateway to this farm-house, on the roadside, is a block of stone, such as not uncommonly may be seen near old houses of the kind, forming two steps, from which a rider mounted his horse. This stone is inscribed with the words ' Byard's Leap.'


"Not less singular are the circumstances which are said to have given rise to the name "of ' Byard's (or ' Bayard's ') Leap,' or the Leap of the horse ' Bayard.' ... It [the Leap] is situated in the midst of what was once a lonely tract of high land, almost a waste, extending for many miles, and called Ancaster Heath. . . . The pedestrian who follows the footpath which runs along the Eastern side of the great Roman highway will observe, at a distance of some fifty yards northwards from the farmhouse of Byard's Leap, and near a pond by the roadside, four very large iron horseshoes, embedded in the soil. If he measures the distance of these shoes from the pond he will find that it is twenty paces or sixty feet, and sixty feet was the length of Byard's Leap. . . . Opposite the farm of ' Bayard's Leap ' is a plantation . . . consisting chiefly of trees of recent growth; but probably there formerly existed an older growth, whose pristine shades were more adapted to harbour weird spirits.  Within that wood, inhabiting, as it is said, a cave, but more likely a deserted quarry of the famed Ancaster stone of the district (such places of abode being still used), there lived the pest and terror of the countryside in the person of an old woman, known far and wide as, par excellence, the witch ... a dangerous character was the old beldame to anyone who ventured to thwart her or cross her path. ...
"If the old woman was denied anything which she craved, of her better-to-do neighbours they were certain speedily to suffer for it. . . . Neither man nor beast is secure from her spells. ... At length, a child having been stillborn in a cottage from which the old woman had been turned away without receiving what she asked for, the indignation ripens, and a plan is proposed, by which it is hoped that the witch's power may be put an end to, while the act shall seem to be of her own originating. The shepherd of the farm has been on something like intimate terms with the old woman, ... as is surmised . . . having had illicit dealings with her, the result, however, being that closer acquaintance with her has in no wise enkindled affection: and although afraid to ' break ' with her ... he would yet greatly rejoice ... if he could terminate the unpleasant thraldom of her influence. . . . By a sort of lottery, the shepherd is selected for the enterprise. He is to lead out the farm horses to water in the evening, at the pond by the roadside, opposite to which is the hag's den.  He is to throw a stone into the water as the horses are drinking, and whichever horse then raises its head first, he is to mount. He is to be armed with a two-edged knife.  He is to call to the old woman to come out and mount behind him. He is to stab her when she has done so as if in self-defence on her springing up behind him; it is hoped that in the struggle she will be drowned; the not unfrequent end of witches. At the appointed time he proceeds to carry out these instructions. The horses are led to the water, the stone is thrown into the pond. The first horse that raises his head on hearing the splash is the blind Bayard; a providential circumstance, since it is likely that any horse which could see would shrink from contact with the witch.

"He mounts the horse Bayard.  He calls out to the old woman, asking her to come and ride behind him. Her reply (which has been preserved) is, ' Wait till I've buckled my shoes and suckled the cubs, and I'll be with you.' He waits, and in due time she comes forth. At his bidding, she mounts behind him.  He at once plunges his knife into her breast. The old hag, in her agony, clutches at the horse's back with the long sharp nails of her fingers. The horse in alarm makes one wild, sudden bound, which lands him full sixty feet from the spot. The witch falls back into the pond and is drowned, so her career is ended.

"Tradition says that the horse made a second bound, equal in length to the first, and which brought him to the corner of the cottages which stand further on by the side of the road ; but only the first is marked by the four huge horse-shoes, which are carefully preserved, in situ, as described above, as standing evidence and memorial of ' Bayard's Leap.' . . . It should here be stated that considerable variations from the foregoing version of the legend exist, as is usually the case with such narratives, in the form of oral tradition still floating in the neighbourhood. For instance, the personality of the hero himself varies from that of a knight-errant of the age of chivalry to that of an ordinary cavalry soldier of a more recent period. . ."

For many years the leap and landing points were marked by holes in the ground, these holes were probably marked parish boundaries and would be re-established at the annual "beating of the bounds". 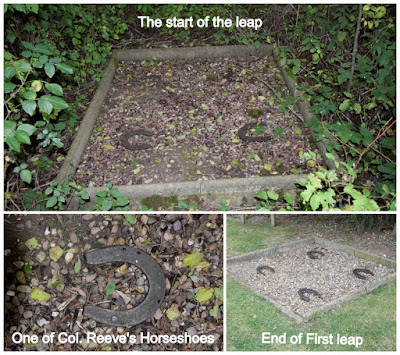 In the mid-19th century the then Colonel Reeve of Leadenham had three sets of horseshoes made by Bradley and Howitt of Newark.  The horseshoes were set in concrete and set in the legendary positions.
In the early 1960s the A17, a trunk road from King's Lynn to the A1, was straightened at Byard's Leap and the third set of horseshoes was in the direct route of the road.  This set of horseshoes was put into storage at Wilsford, several years later they were returned and placed near to Byard's Leap Cottages on the north side of the A17.

Map showing the re-alignment of the A17

Reproduced with the permission of the National Library of Scotland 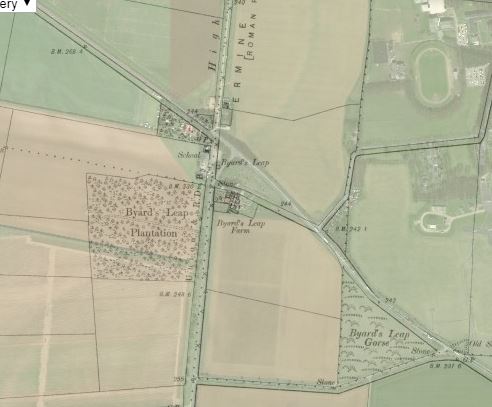