The Virgin Mary and the Wain Well

The above image shows Eastgate from the Bailgate junction.

The present road runs east-north-east from Bailgate to the the site of the Roman east gate. The junction of Bailgate and Eastgate would be north of Gordon Road and would run directly east to the gate in Roman times . The road heading west from the junction is now beneath Lincoln Castle, the west gate of the Roman settlement is below and to the north of the Castle’s present day west gate. The position of the road was probably moved during the medieval period to enable easier access to the east gate of Lincoln castle. 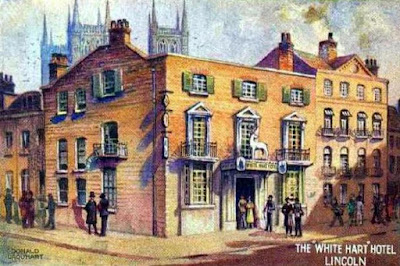 The building on the right of Eastgate is The White Hart Hotel, a former coaching inn dating from the 14th century.  On the left of the junction was an ancient inn, the Angel; a gate to the Cathedral Close stood at this junction between the White Hart and the Angel.  The Angel Yard remains behind the Post Office.

Further down on the left is an Indian restaurant, this was once was The Black Horse Inn dating from 1674, the White Horse Inn was nearby. 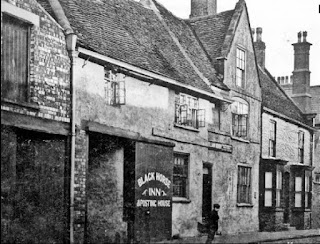 Across the road, in front of the Cathedral, there is a stone wall which was once a row of buildings; there is a stone head in this wall, the head is possibly one of those removed during the Civil War by Cromwell's men.

In the grounds of the Lincoln Hotel is the base of the north side of the Roman east gate, the gate was still standing, with medieval additions until Sir Christopher Wray had it demolished to extend the garden of Eastgate House.

The Lincoln Hotel was built in the early 1960s, previously the Eastgate Hotel, and attached to the west wing of the former Eastgate House.  Alfred Shuttleworth, the son of one of the founders of Clayton, Shuttleworth & Co, lived here from the 1890s.  Across the road from Eastgate House once stood the Dolphin Inn and other buildings. Alfred bought all the buildings and had them demolished because they spoilt his view of the Cathedral; he did a great service to the City of Lincoln by doing this but it was very unpopular at the time as the Dolphins was a popular inn. 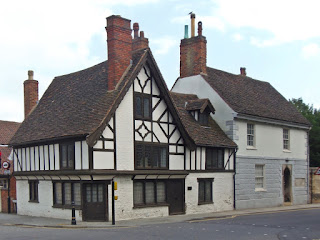 On the corner of Eastgate and Priorygate stands “The Rest”. The Rest is a late 17th century building which was renovated by Alfred Shuttleworth in 1899 with sham timber cladding. At one time it was available for use by people who had ascended Lindum Road and needed a rest.

St Peter in Eastgate church is on the left side of Eastgate. In common with many churches in Lincoln, St Peter’s was badly damaged during the Civil War. The church was demolished in 1776, a new church was built in 1781 but was inadequate for the growing population of the 19th century and a new church was designed by Sir Arthur Blomfield and completed in 1870. In 1914 the south aisle, west porch and the choir vestry were added due to the generosity of Alfred Shuttleworth. At the same time, the Nave ceiling was enclosed as a ‘barrel roof’, the Rood Screen erected and St. Margaret’s Chapel, dedicated.

At the Langworthgate and Greetwellgate fork, there was once a well, the Wain Well, which, on 11th August 1498, Joanna Burton fell in. The well was about 66 feet deep plus 6 feet of water so her survival of the fall seemed doubtful, “but according to sworn testimony of nine women”, she was in the well for an hour and she was carried from the well in the arms of the Virgin Mary. It seems strange to me that this wasn’t seen as a miracle, England was still a Roman Catholic country at that time. 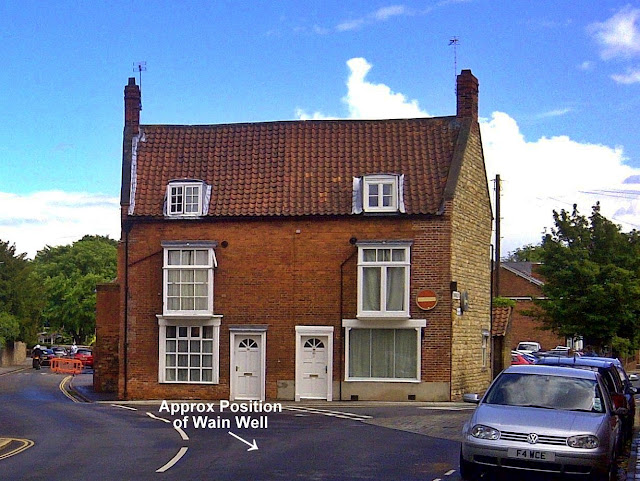