Cold Bath House parish was created in 1837.  It had an area of one acre and was situated at the top of the Arboretum at the junction of Lindum Terrace and Eastfield Road. 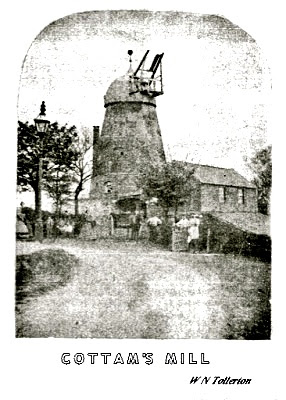 A windmill,  Cold  Bath  Mill, had been on the site for  many years. Robert Cottam was the miller until his son, George, took over in
July 1839 on the death of his father, age 62:   George probably died about 1865.  By this time windmills were becoming redundant and steam powered mills were taking over.

Henry Kirk Hebb, solicitor, clerk to the urban sanitary committee, town clerk to Lincoln Corporation for 30 years and chairman of the Lincoln and Lindsey Bank had Cold Bath House built in about 1867.


The house was designed by Michael Drury, the Lincoln Architect.  Tenders for the erection of the house between £1,579 and £1,849 were received, the lowest price was from Robert Young, builder and contractor, his tender was accepted, a large quantity of materials from existing buildings was used.  The location of the house perched on the cliff edge must have been very impressive. There was a room in the house designed to entertain the entire City County.  A spring ran in the cellar, possibly the reason for the name of the area.

Hebb lived at the house until his death in 1902.

In 1905 Mrs Matilda Richardson lived at the house, she was the widow of William Wright Richardson, a director of  Doughty, Son and Richardson Ltd.


In 1907 all the Lincoln parishes were incorporated into a single Lincoln parish, after 70 years Cold Bath House parish was relegated to the history books.  Cold Bath House was the only building in the parish and the number of residents stayed static at 5.  This 1 acre, single house parish was the smallest in Lincoln both in size and number of residents.
During the First World War the house became home to the headmaster of the Lincoln School and its boarders.
After the First World War Cold Bath House became Mrs Swan’s Nursing Home.


The nursing home continued until 2nd August 1942, when the County Hospital and the nursing home were attacked by a German bomber.  The main damage at the County Hospital was to the Nurses home, the operating theatre, the board room and the massage room, windows of two of the wards were damaged and some of the patients suffered injuries from flying glass.  Mrs Swan’s Nursing Home was almost totally destroyed, the building was demolished in 1945.


A bomb also dropped on the allotments nearby on St Anne’s Road.  It is thought the crew of the aircraft spotted the chimney at the hospital and thought it was a factory.

Unfortunately I have not located an image of the undamaged house.

The site was cleared and was a small holding until late in 1952.  The southern part of the grounds of Cold Bath House were landscaped and incorporated into the Arboretum to celebrate the Coronation of H M Queen Elizabeth II in 1953.

Views though the lower gate into the cellar