The Lincoln Waterworks Company was established in 1846 to provide fresh drinking water to the growing city of Lincoln. One of the main requirements. of a fresh water system is a reservoir: Prial Drain gave a regular supply of fresh water so the Company built a dam adjacent to the road to Skellingthorpe.
The lake covered 25 acres and held 23 million gallons of water. The water was piped to the Boultham filter beds near Altham Terrace and then pumped to a service reservoir in Lincoln. The lake supplied a total of 733 homes and was used until 1911. It was long thought that the Skellingthorpe lake was responsible for the Lincoln Typhoid outbreak of 1905 but it was caused by human waste in the upper Witham. 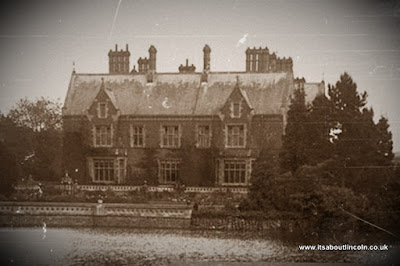 Joseph Shuttleworth was a successful engineer, a partner in Clayton Shuttleworth & Company, and needed a home suitable to his status. In 1861 he bought the lake and grounds, in 1862 Hartsholme Hall, designed by Major F H Goddard, was built for him. As well as the grand Hall a stable block, cottages, laundry, battery house, farmstead, lodges on Skellingthorpe Road and Doddington Road were also constructed. The interior of the Hall took a further 2 years to complete. 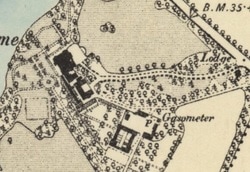 The grounds were designed by Edward Milner, the Victorian landscape gardener, who later designed the The Arboretum 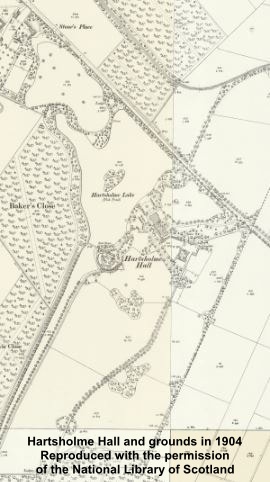 The Doddington Road Lodge was built in 1879 and the size of the estate was increased to about 300 acres. The boathouse was built in 1881 and is the last building on the park to display the Shuttleworth crest.
Joseph died in 1883, and his widow moved to Heighington Hall. Hartsholme Hall passed to his eldest son, Alfred.
​Alfred lived mainly in The Close in Lincoln, later extending Eastgate House, now part of
the Lincoln Hotel . Nathaniel Clayton Cockburn moved into the Hall in the mid 1890s.
In 1902 it was sold to Colonel Thomas Harding. Harding installed electricity in the Hall and re-erected a monument originally erected by the waterworks company to commemorate the building of the reservoir.
By 1906 the Hall was substantial, having five main ground floor rooms, a winter garden, and nineteen bedrooms as well as kitchens and servants' quarters ​
Lord Liverpool (Sir Arthur William de Brito Savile Foljambe (1870-1941)) bought the estate in 1909 for £16,250. Lord Liverpool was Governor, later Governor-General. of New Zealand. He died at Canwick Hall in 1941.
January 1939, J E Walter & Sons, the Lincoln estate agent, was
instructed to sell the Hartsholme Estate. The Estate comprised of 2,700 acres and included
"Hartsholme Hall with beautiful Gardens, Grounds, Ornamental Lake, with extensive Kitchen Gardens, Greenhouses, 2 Lodges, 3 Estate Cottages, 2 Keepers Cottages, Laundry Cottage, Butler's and Gardener's Cottage."
"687 Acres of Woodland", "The Most Attractive Residence known as Stones Place with choicely laid out Gardens and Greenhouses, etc.",
"15 Farms & Small Holdings. Valuable Building Frontages and Accommodation Lands, 20 Cottages & Gardens."
The Hall was purchased by Thomas Place, timber Merchant, of Northallerton. He did not take up residence in the Hall, he may have bought it for demolition and sale of the building materials: it was common practice to do this as the value of the building materials was often greater than the value of the building.
The estate was requisitioned by the Army in 1942 for military training. The Hall was an officers mess. 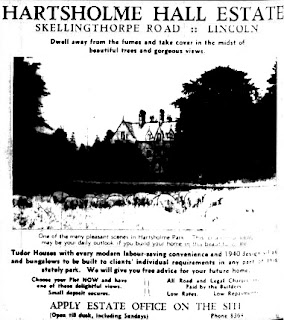 At the end of hostilies the Hall was used used by homeless families, by 1947 32 families were squatting in it. Thomas Place put the estate up for sale and demanded compensation from Lincoln Corporation.

The Hall and 130 acres were sold to Lincoln Corporation, the sale was eventually completed in 1951. The Hall was to be to converted to an old peoples home but the neglect and damage sustained to the structure of the building meant that there was no alternative but to demolish it at a cost of £600.00. The kitchen block and other buildings were left standing for Civil Defence use. The kitchen block was eventually demolished in 1964.
at 9.7.20