The company of H Newsum, Sons & Co was established as a steam mill in 1856 by Henry Newsum (1833-1901) of Rotherham in Broadgate, Lincoln. These works were destroyed by fire in 1874, the Drill Hall was later built on the site, and Newsum moved to 17 Pelham Street.
By 1881 Newsums employed 121 men and 12 boys. It was realised after World War I that the
joinery works there were too small for the Company’s expansion plans and a green field site next to the West Common south of Carholme Road was acquired. This was a large site complete with its own railway. Newsums expanded opening works in Gainsborough, Hull and Manchester.

The company continued to prosper until after World War II, exporting 1,000 wooden prefabricated houses to South Australia and also to Ajax in Ontario, Canada in the early 1950s.  In 1956 the company recorded a trading loss of £151,106, leading to the closure of the Lincoln site and a move to its site in Gainsborough.
Gainsborough closed in 1968 bringing to an end a company of over 100 years old.
Associated Electrical Industries (AEI), later English Electric Valves, moved onto the site and remained there until 2007 when the site was sold for housing. This was the end of manufacturing in this area of Carholme Road, Fisons having closed many years before. 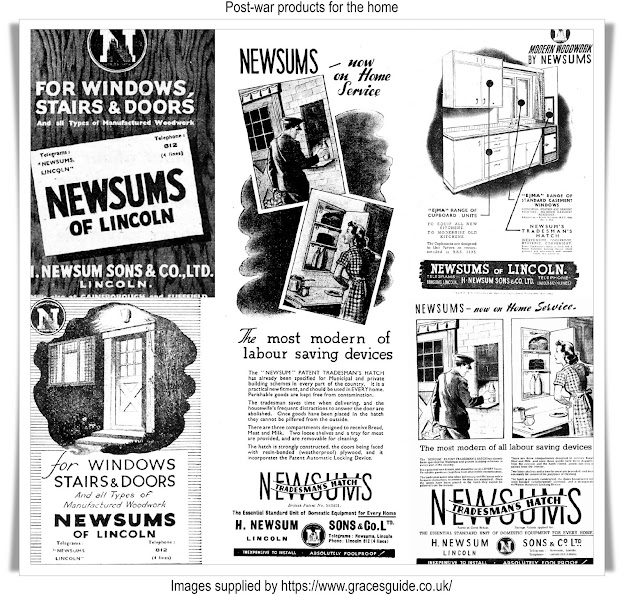 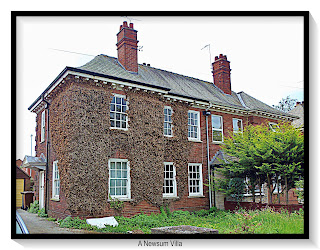 Newsum Villas were built in 1920 on the northern perimeter of Newsum's new joinery works.  One detached and eight 3 bedroom semi-detached houses were built for senior staff at the works.

Designed in a pseudo-Georgian style, the houses are well built in brick and well proportioned.  Sadly all the houses except one have had their Georgian proportioned sash windows replaced with upvc double-glazed units that detract from the design of the houses.  The house in the photograph was in the process of being renovated when I photographed it and has had its beautiful wooden windows replaced.