The number of cinemas in Lincoln grew until World War II, two were lost during the conflict, and gradually cinemas closed down until by 1988 there was only one commercial cinema in Lincoln. The same decline is now being reflected in the closure of public houses.
The Central
Opened 1904 Closed 06/03/1944

This site may have been used for entertainment in the mid 19th century. The landlord of the Green Dragon. James Budd opened Budd's Alhambra Concert Hall at the rear of the pub in 1857.  Budd's wife died in 1870 about the same time that the Alhambra closed and before 1872 a new landlord took over at the Dragon.
The New Temperance Hall was opened on 20th October 1902 on St Swithin's Square, replacing an earlier Temperance Hall. It screened its first film in 1904 during the run of a pantomime “A Christmas Dream”. The hall could seat 1,000 in stalls and circle levels.
The popularity of the new moving pictures meant that the building went from presenting live theatre to full-time cinema use, it was renamed the Central Cinema. The Central Cinema was the first in the city to present a sound on disc film “The Donovan Affair” on 12th August 1929. The first sound on film was presented on 23rd September 1929.
An organ was installed in 1944, but during installation, the building was destroyed by fire on 6th March 1944. The ruins were eventually demolished in 1960.
The Astoria
Opened 1910 Closed 23/06/1956 The Corn Exchange was built on the north side of Cornhill in 1879. It opened as the Cinematograph Hall on 28th May 1910 and was the first permanent cinema to open in the city. All seating for 1,760 was on a single floor. The building continued to operate as a corn exchange.
A Western Electric sound system was installed on 6th April 1931, and the first ‘talkie’ to be screened here was “Third Time Lucky”. By 1934 it had been re-named Exchange Kinema.
The cinema closed early in 1954 for refurbishment and was renamed Astoria Cinema. “River of No Return” starring Robert Mitchum and Marilyn Monroe was the first Cinemascope film shown at the cinema. In January 1956, the Astoria Cinema was taken over by the Rank Organisation, and it was closed on 23rd June 1956.
Known locally as the "Ecky", thank you Mark Robinson.
The Grand
Opened: 1911 Closed 21/02/1960

The façade of Garmston House was erected in 1772 and incorporates parts of a 12th-century building, including an arch and a Norman fireplace of the later 12th-century in its north wall.
Located near the top of the High Street, at numbers 262 and 262a, almost opposite Grantham Street. The garden behind Garmston House ran as far as Hungate and is believed to be the site of Lincoln's second synagogue, built in the 12th century.  Central Picture Theatres (Lincoln) Ltd, converted the right side of the building (262a) into Lincoln’s first purpose-built cinema, opening in May 1911. The floor was not on a slope as in more modern cinemas. In 1913 it was renamed the Grand Electric Cinema, and later renamed simply the Grand
The first ‘talkie’, Paul Robeson in “Showboat”, was screened on 23rd September 1929. The cinema closed on 21st February 1960, 'Gigi', Starring Leslie Caron, Louis Jourdan, Maurice Chevalier and Hermione Gingold was the last film shown there.
There were proposals to build a relief road through the site and along Grantham Street, it is not known whether it closed due to that or because of falling attendances. Fortunately, the relief road idea was abandoned, but not before the destruction of the houses of Grantham Street, but a Lincoln building with medieval roots was saved.
The Regal
Opened 18/01/1915 Closed 26/02/1966 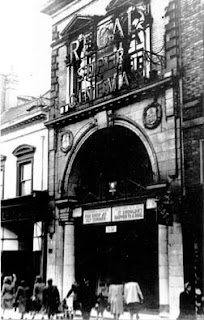 The Picturehouse was at 217/8 High Street near the Stonebow. Opened in 1915, the Mayor, Cllr M A Ashley, with leading citizens, attended the opening ceremony. The film they saw was “The Fighting Strain of Old England”, probably very appropriate at that time. John Smith & Co's wholesale and retail grocery shop had traded there for the previous 70 years. Conversion to the cinema involved the gutting of the ground and first floors, the second-floor facade was retained. The Regal's first-floor cafe, with its balcony overlooking the High Street, was a popular meeting place. There was a seating capacity of around 1200.
It was taken over by the Associated British Cinemas( ABC) chain in 1930, and after a refurbishment, re-opened as the Regal Super Cinema in 1931 with Conrad Nagel in “A Lady Surrenders”. The re-opening ceremony was attended by film star Dodo Watts (1910-1990). A cafe was opened on the first floor (previously it had been inside the cinema) with a balcony overlooking the High Street.
ABC closed the Regal Cinema on 26th February 1966 with Julie Andrews in “Mary Poppins”.
The Plaza
Opened 1931 Closed 23/05/1943 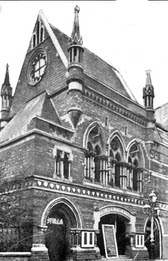 The building was designed in a Gothic style by Lincoln architect William Watkins and built for the Freemasons in 1871. There was seating for 1,500 in stalls and a balcony. It was used for public entertainment and concerts.
In 1901 alterations were made to the building and it became the Empire Music Hall.
It was acquired by the MacNaghten Vaudeville Circuit on 6th January 1902 and was renamed The Palace Theatre, it became the main variety theatre in Lincoln, with many famous stars appearing there, including George Formby, Gracie Fields and Harry Tate. The Palace Theatre closed on 17th May 1930 with the stage revue “Lincoln Calling”.  In 1931 it was sold to Central Picture Theatres Ltd., and re-opened as the Plaza Cinema on 26th January 1931 with John McCormick in “Song of my Heart”.
The Plaza Cinema was destroyed by German bombs on the night of 23rd May 1943, a night watchman, who was on duty at that time, was killed. The building lay in ruins until 1953 when the remains were demolished. ​
The Savoy
Opened 1936  Closed 20/10/1988 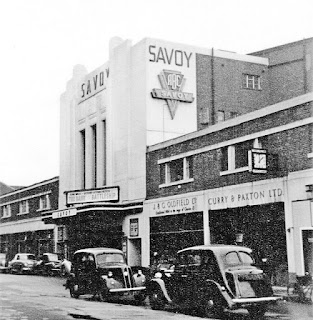 The Savoy Cinema, operated by Associated British Cinemas, was officially opened on 14th December 1936 by the Mayor of Lincoln, Coun J E Fordham. It was designed by Scottish architect, William Riddell Glen. 1,936 seats were provided in stalls and circle levels, there was a large stage and twelve dressing rooms.
The first film shown at the cinema was “A Tale of Two Cities” starring Ronald Colman.
'Henry Hall and His World Famous Band' performed at the Savoy Cinema in Lincoln on 19th March 1939; in aid of the Echo Cot Fund at the County Hospital;
From the early 1950s to 1971 many live shows were presented on stage, including many of the top acts of the time.
The Savoy was renamed the ABC in 1961
A Compton organ was installed as the cinema was built, it was removed in 1965 and installed in a private cinema in North Muskham near Newark.
In 1972 the stalls were converted to a Star Bingo Club and the circle became the cinema.
​On 15th November 1986, the ABC chain was taken over by the Cannon Group, and the cinema was re-named The Cannon. The cinema finally closed on 20th October 1988 and was demolished in 1990. The Waterside Shopping Centre was built on the site in 1991.
The Ritz
Opened 1937 Closed 21/10/1981 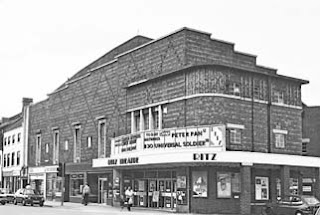 The Ritz Cinema, designed in an Art Deco style by Leslie C Norton for the Segelman family’s Central Pictures (Lincoln) Ltd. It opened on 22nd February 1937 with the film "San Francisco" starring Clark Gable, Jeanette MacDonald, and Spencer Tracy. It was capable of seating a total of 1,750 (1,240 in the stalls and 510 in the circle).
There was minor damage to the cinema due to German bombing in 1941
CinemaScope was installed in the cinema in 1954, the first cinema in Lincoln to have it and the first CinemaScope film was “The Robe” starring Richard Burton.
The Rank Organisation acquired the Ritz on 2nd January 1956: it was re-named Odeon on 20th August 1956.
The Odeon closed on 17th October 1981 and remained closed, until in 1984, Barry Stead, an independent exhibitor, took over the cinema.
The cinema reverted to its original name and opened as the Ritz Cinema on 15th February 1985 showing Walt Disney’s "101 Dalmations". In 1995 it was converted to a triple screen cinema, closing 16th March 1996, it then re-opened as a J D Wetherspoon pub called “Ritz” using only the ground, the former circle and projection areas were closed off.
The Ritz Cinema re-opened at the end of 2013 as a 450 seat cinema in the former circle area.
The Radion
Opened July 1939, closed September 1939 due to WWII, re-opened 1947, closed 16 July 1960 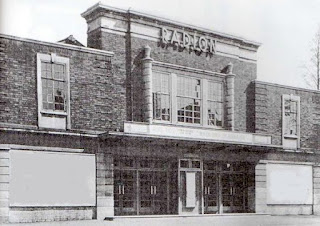 The Radion was Lincoln's last single-screen cinema to open, and the only one built outside the city centre and had the shortest life. Designed by cinema architect and entrepreneur Major W J King in a modernist style. Opening on 27 March 1939 it closed shortly after the outbreak of World War II and was requisitioned by the military. Re-opened in 1945 it eventually closed 16 July 1960. The reason for the closure was not due to lack of patrons but because of the vandalism the building suffered.
The building became a supermarket and later the studio for Radio Lincolnshire in 1980.
Which was your favourite cinema?
What was the best film you saw at a Lincoln cinema?
Did you used to say "This is where we came in?
Please post your answers in the comments below 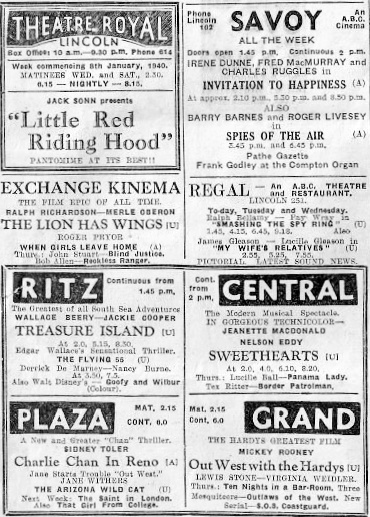