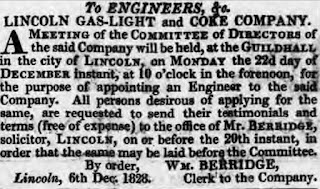 Gas was first used to light a house in 1792. By 1826 Stamford, Boston, Louth and Gainsborough all had opened gasworks. It wasn’t until 1828 Lincoln Gas, Light and Coke Co was founded at the junction of Carholme Road and Brayford Wharf North, by a group of Lincoln businessmen. The company had capital of £8,000 in shares and a mortgage of £1,800. Production of gas began in 1830.


First Year Accounts
First year accounts show a turnover of £1,515 and a loss of £330. Wages amounted to £436. 76 street lamps were lit in Lincoln.
​
The First Private Consumer
The first private consumer was Cornelius Maples of the Bail. He had to give the following undertaking:
“Gas to be consumed in the shop from sunset until the hour of nine for six days in the week.
“I will not wilfully wastefully consume gas, and as far as I can I will not suffer the flame to exceed the height of 3 ½ inches, and I will not commence burning until sunset at any time and will extinguish such light within a quarter of an hour from the time here agreed upon, except on Saturday night when the burning shall, if I require it, continue an hour extra.
“The charge per half-year to be £2 per light, payable in advance”

It wasn't viable for the company to lay pipes outside of Lincoln, companies like Porter & Co of Lincoln, supplied complete gas plants to large country houses and some villages so that gas could be produced locally. Hartsholme Hall had its own gas plant, probably supplied by Porters.
Bracebridge Gasworks 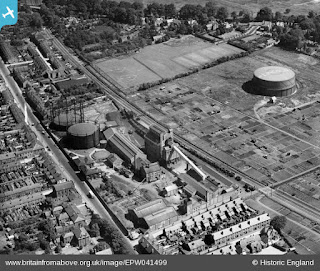 The use of gas had grown considerably over the previous 40 years and there was little room to enlarge the site at the Carholme Road plus it was becoming more and more difficult to get a sufficient coal to carbonise, due to the size of barges on the Fossdyke. Bracebridge was growing from a village into a suburb of Lincoln and the recently opened Lincoln to Honington railway gave it easy access to coalfields therefore it was decided that a new gasworks would be built at Bracebridge. The Bracebridge gasworks opened in 1876.


The owners of the gasworks had tried for several years to sell it. In 1885 agreement was made with Lincoln Corporation to buy the gasworks.


A New Gasholder
The rapid increase in consumers during the previous 40 years meant that the maximum storage for gas was only enough for 12 hours consumption.
Various types of gasholder were inspected and in 1930 a new holder of the three-lift spiral guided type was ordered to increase storage capacity. The capacity of the new holder was 1,500,000 cubic feet. 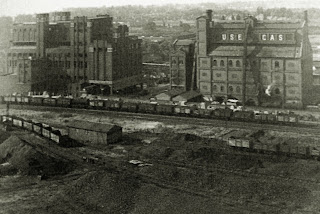 The End of Coal Gas
Natural Gas was found in 1910 in Germany, in the mid-1950s BP discovered natural gas fiels in several places in the UK, a field was discover near Gainsborough in the late 1950s. It wasn't until the 1970s that drilling for natural gas in the North Sea became economically viable due to the 1973 oil crisis. Since that time coal gas production has ceased in the UK.​