The History of the Usher Gallery & Temple Gardens 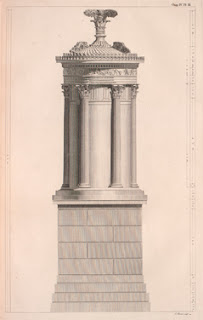 for an annual fee of 10s. (50p) payable in April of every, in 1824 as a pleasure ground. The Gardens were laid out with plants and antiquities. Moore had built a copy of ​the Greek Choragic Monument of Thrasyllus. Band concerts and exhibitions were held in the Gardens.
The Choragic Monument of Lysicrates near the Acropolis of Athens was erected by the choregos Lysicrates, a wealthy patron of musical performances in the Theater of Dionysus, to commemorate the prize in the dithyramb contest of the City Dionysia in 335/334 BCE, of which performance he was liturgist.
The monument is known as the first use of the Corinthian order on the exterior of a building. It has been reproduced widely in modern monuments and building elements.
Public Domain, https://commons.wikimedia.org/w/index.php?curid=5239070
The second annual "Lincolnshire, Nottinghamshire and Yorkshire Grand Brass Band Contest and Peoples Festival" was held on 6 June 1859 at Temple Gardens, total prize money was £50.  Sixteen bands had entered and the public could attend on the payment of 1 shilling (5p) the event ended with a "grand display of fireworks.  Cheap train tickets were made available throughout the area covered by the contest.

Band concerts and fetes were regular attractions at Temple Gardens.
Joseph Moore died 21st May 1863 and the Gardens were closed. The plants and equipment were sold at auction by Brogden & Co on 4th April 1864.

The Gardens were left to become overgrown, and were eventually bought by the Collingham family of Mawer & Collingham, the Lincoln department store on the corner of High Street and Mint Street, and added to their house at 7 Lindum Road. The house and Temple Gardens were sold in the early 1920s to the Ecclesiastical Commissioners.
Usher Gallery 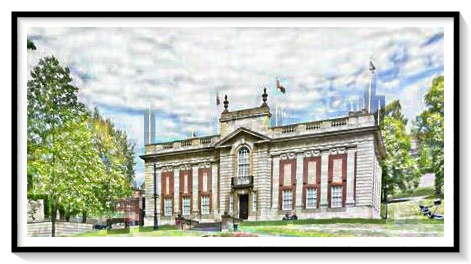 The Usher Art Gallery (as it was once known) came about due to a bequest from James Ward Usher, a Lincoln jeweller. James was an avid collector of ceramics, watches, clocks, coins, silver, miniatures and paintings.
James never married and left his collection to the City of Lincoln together with almost £60,000 (equivalent to £3,447,000.00 based on the retail price index) to design and erect a suitable building to house it.
The Ecclesiatical Commissioners imposed certain conditions when the land was sold to Lincoln Corporation, one of these conditions was that the building should stand in the north western corner of Temple Gardens, eventually it was agreed that the Gallery should be built on the tennis courts where it now stands. Sir Reginald Blomfield was commissioned to design the building, he also designed the Central Library and Westgate Water Tower, and Willam Wright and Son (Lincoln) Ltd. were engaged to erect the building, which began in August 1925. Two foundation stones were laid on 10th March 1926 by the Mayor of Lincoln, Coun. Miss M E Nevile, the stones were left plain at the request of Councillor Neville.  A total of 119 piles from 14 to 25 feet long were used to stabilise the ground. The cost of the building was in the region of £34,000.
The Gallery was officially opened on the 25th May 1927 by the then Prince of Wales (later King Edward VIII) with a solid gold key.
The Collection archaeology museum is located on Danes Terrace near to the Usher Gallery, visit the Collection website: https://www.thecollectionmuseum.com/
at 18.7.20